Due to popular request I've sharing some very simple Newton's Method Fractal code in MATLAB. It produces the following 800x800 image (in about 2.5 seconds on my 2.4Ghz Macbook Pro): 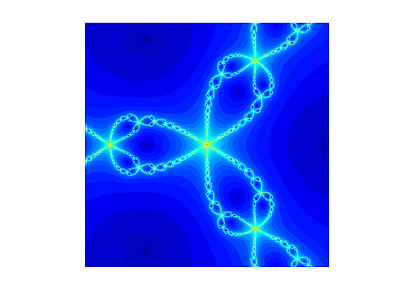 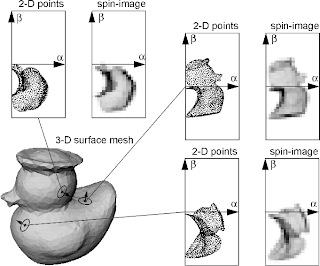 Spin images aren't a thing of the past, in fact here is a link to a RSS 2009 paper by Kevin Lai and Dieter Fox which uses spin images (and my local distance function learning approach!):
3D Laser Scan Classification Using Web Data and Domain Adaptation
Posted by Tomasz Malisiewicz at Wednesday, July 15, 2009 7 comments:

I have been an anti-realist since a freshman in college. Due to my lack of philosophical vocabulary I might have even called myself an idealist back then. However, looking back I think it would have been much better to use the word 'anti-realist.' I was mainly opposed to the correspondence theory of truth which presupposes an external, observer independent, reality to which our thoughts and notions are supposed to adhere to. It was in the context of the Philosophy of Science that I acquired my strong anti-realist views, (developing my views while taking Quantum Mechanics, Epistemology, and Artificial Intelligence courses at the same time). Pragmatism -- the offspring of William James -- was the single best view which best summarized my philosophical views. While pragmatism is a rejection of the absolutes, an abandonment of metaphysics, it does not get in the way of making progress in science. It is merely a new a perspective on science, a view that does not undermine the creativity of the creator of scientific theories, a re-rendering of the scientist as more of an artist and less of a machine.

However, pragmatism is not the anything-goes postmodern philosophy that many believe it to be. It is as if there is something about the world which compels scientists to do science in a similar way and for ideas to converge. I recently came across the concept of Linguistic Idealism, and being a recent reader of Wittgenstein this is a truly novel concept for me. Linguistic Idealism is a sort of dependence on language, or the Gamest-of-all-games that we (humans) play. It is a sort of epiphany that all statements we make about the world are statements within the customs of language which results in a criticism of the validity of those statements with respect to correspondence to an external reality. The criticism of statements' validity stems from the fact that they rely on language, a somewhat arbitrary set of customs and rules which we follow when we communicate. Philosophers such as Sellars have gone as far as to say that all awareness is linguistically mediated. If we step back, can we say anything at all about perception?