In his Philosophical Investigations, Wittgenstein argues against abstraction -- via several thought experiments he strives to annihilate the view that during their lives humans develop neat and consistent concepts in their minds (akin to building a dictionary). He criticizes the commonplace notions of meaning and concept formation (as were commonly used in philosophical circles at the time) and has contributed greatly to my own ideas regarding categorization in computer vision.

Wittgenstein asks the reader to come up with the definition of the concept "game." While we can look up the definition of "game" in a dictionary, we can't help but feel that any definition will be either too narrow or too broad. The number of exceptions we would need in a single definition scales as the number of unique games we've been exposed to. His point wasn't that game cannot be defined -- it was that the lack of a formal definition does not prevent us from using the word "game" correctly. Think of a child growing up and being exposed to multi-player games, single-player games, fun games, competitive games, games that are primarily characterized by their display of athleticism (aka sports or Olympic Games). Let's not forget activities such as courting and the Stock Market which are also referred to as "games." Wittgenstein criticizes the idea that during our lives we somehow determine what is common between all of those examples of games and form an abstract concept of game which determines how we categorize novel activities. For Wittgenstein, our concept of game is not much more than our exposure to activities labeled as games and our ability to re-apply the word game in future context.

Wittgenstein's ideas are an antithesis to Platonic Realism and Aristotle's Classical notion of Categories, where concepts/categories are pure, well-defined, and possess neatly defined boundaries. For Wittgenstein, experience is the anchor which allows us to measure the similarity between a novel activity and past activities referred to as games. Maybe the ineffability of experience isn't because internal concepts are inaccessible to introspection, maybe there is simply no internal library of concepts in the first place.

An experience-based view of concepts (or as my advisor would say, a data-driven theory of concepts) suggests that there is no surrogate for living a life rich with experience. While this has implications for how one should live their own life, it also has implications in the field of artificial intelligence. The modern enterprise of "internet vision" where images are labeled with categories and fed into a classifier has to be questioned. While I have criticized categories, there are also problems with a purely data-driven large-database-based approach. It seems that a good place to start is by pruning away redundant bits of information; however, judging what is redundant and how is still an open question.
Posted by Tomasz Malisiewicz at Monday, October 26, 2009 No comments:

Although the authors report results on the image categorization task it is worthwhile to ask if scene prototypes could be used for object localization. While it is easy to be the evil genius and devise an image that is unique enough such that it doesn't conform to any notion of a prototype, I wouldn't be surprised if 80% of the images we encounter on the internet conform to a few hundred scene prototypes. Of course the problem of learning such prototypes from data without prototype-labeling (which requires expert vision knowledge) is still open. Overall, I like the direction and ideas contained in this research paper and I'm looking forward to see how these ideas develop.
Posted by Tomasz Malisiewicz at Monday, October 19, 2009 4 comments: 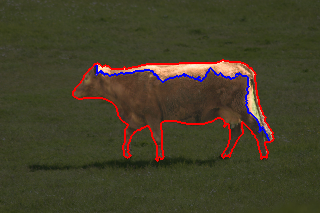 In conclusion, the representation used by segmentation (that of free-form regions) is superior to sliding window approaches which utilize rectangular windows. However, off-the-shelf segmentation algorithms are still lacking with respect to their ability to generate such regions. Why should an algorithm that doesn't know anything about objects be able to segment out objects? I suspect that in the upcoming years we will see a flurry of learning-based segmenters that provide a blend of recognition and bottom-up grouping, and I envision such algorithms to be used a strictly non-feedforward way.
Posted by Tomasz Malisiewicz at Tuesday, October 13, 2009 7 comments: