Can a person-specific face recognition algorithm be used to determine a person's race?

It's a valid question: can a person-specific face recognition algorithm be used to determine a person's race?

I trained two separate person-specific face detectors.  For each detector I used videos of the target person's face to generate positive examples and faces from [google image search for "faces"] as negative examples.  This is a fairly straightforward machine learning problem: find a decision boundary between the positive examples and the negative examples.  I used the VMX Project recognition algorithm which learns from videos with minimal human supervision.  In both cases, I used the VMX webapp for training (training each detector took about ~20 minutes from scratch).  In fact, I didn't even have to touch the command line.  Since videos were used an input, what I created are essentially full-blown sliding window detectors, meaning that they scan an entire image and can even find small faces. I then ran this detector on the large average male face image.  This average face image has been around the internet for a while now and it was created by averaging people's faces.  By running the algorithm on this one image, it analyzed all of the faces contained inside and I was able to see which country returned the highest scoring detection!


Experiment #1
For the first experiment, I used a video of my own face.  Because I was using a live video stream, I was able to move my face around so that the algorithm saw lots of different viewing conditions.  Here is a the output.  Notice the green box around "Poland."  Pretty good guess, especially since I moved from Poland to the US when I was 8. 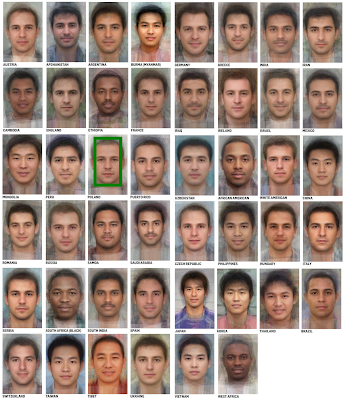 Here is a 5 min video (VMX screencapture) of me running the "Tomasz" (that's my name in case you don't know) detector as I fly around the average male image.  You can see the scores on lots of different races.  High scoring detections are almost always on geographically relevant races.


Experiment #2
For the second target, I used a few videos of Andrew Ng to get positives.  For those of you who don't know, Andrew Ng is a machine learning researcher, entrepreneur, professor at Stanford, and MOOC visionary.  Here is the result.  Notice the green box around "Japan."  Very reasonable answer -- especially since I didn't give the algorithm an extra Asian faces for negatives. 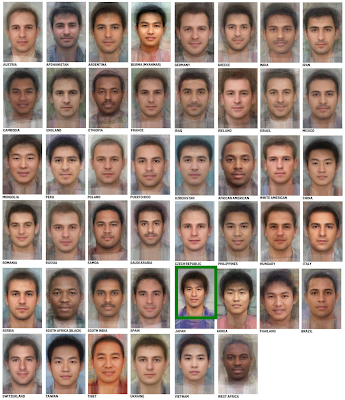 Here is a 5 min video (VMX screencapture) of me running the "Andrew Ng" detector as I fly around the average male image.

In conclusion, person-specific face detectors from VMX can be used to help determine a person's race.  At least the two VMX face detectors I trained behaved as expected.  This is far from a full-out study, but I only had the chance to try out on two subjects and wanted to share what I found.  The underlying algorithm inside VMX is a non-parametric exemplar-based model.  During training the algorithm uses ideas from max-margin learning to create a separator between the positives and negatives.

If you've been following up on my computer vision research projects, you should have a good idea of how these things work.  I want to mention that while I showcase VMX being used for face detection, there is nothing face-specific inside the algorithm.  The same representation is used for bottles, cars, hands, mouths, etc.  VMX is a general purpose object recognition ecosystem and we're excited to finally be releasing this technology to the world.

There are lots of cool applications of VMX detectors.  What app will you build?

To learn more about VMX and get-in on the action, simply checkout the VMX Kickstarter project and back our campaign.
Posted by Tomasz Malisiewicz at Sunday, January 12, 2014