why I should be hacking with a kinect

It was recently brought to my attention that Alex Berg a.k.a. Alexander Berg is hacking with a Kinect.
In case you didn't know, Alex Berg is an assistant professor at Stony Brook University as of Sept 2010.  He came out of Jitendra Malik's group, and can be thought of as my academic uncle (because he got his PhD with Jitendra at basically the same time as my advisor, Alyosha Efros). I am a big fan of Alex Berg's work.  (See the paper at ECCV 2010: What does classifying more than 10,000 image categories tell us? and note his upcoming workshop "Large Scale Learning for Vision" at CVPR 2011).

I had already known that Xiaofeng Ren has been hacking with RGB-D cameras such as the Kinect for some time now.  Xiaofeng (pronunciation of first name) Ren is a research scientist at Intel Labs Seattle since 2008 and on the affiliate faculty at the CSE department at UW since 2010.  He is another one my many academic uncles and has contributed greatly to the field of Computer Vision.  For some of his recent work with Kinects, see his RGB-D project page. Xiaofeng Ren's work has also been very influential during my own research -- it is worthwhile to recall that he coined the term "superpixels", which is prevalent in contemporary Computer Vision literature. 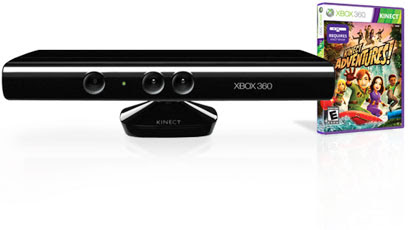 So when I learned that these bad-ass ex-Berkeley hackers are hacking with Kinects, I figured it was the time to acquire one of my own. I bought a Kinect today and plan on playing with Alex Berg's kinect2matlab interface for Mac OS X soon!

So, why aren't you hacking with a kinect?
Posted by Tomasz Malisiewicz at Friday, December 31, 2010