My first week at MIT: What is intelligence?

In case anybody hasn't heard the news, I am no longer a PhD student at CMU.  After I handed in my camera-ready dissertation, it didn't take long for my CMU advisor to promote me from his 'current students' to 'former students' list on his webpage.  Even though I doubt there is anyplace in the world which can rival CMU when it comes to computer vision,  I've decided to give MIT a shot.  I had wanted to come to MIT for a long time, but 6 years ago I decided to choose CMU's RI over MIT's CSAIL for my computer vision PhD.  Life is funny because the paths we take in life aren't dead-ends -- I'm glad I had a second chance to come to MIT.

In case you haven't heard, MIT is a little tech school somewhere in Boston.  Lots of undergrads can be caught wearing math Tshirts and posters like the following can be found on the walls of MIT: 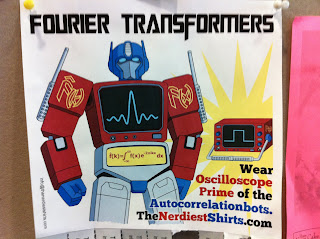 A cool (undergrad targeted) poster I saw at MIT

As of last week I'm officially a postdoc in CSAIL and I'll be working with Antonio Torralba and Aude Oliva. I've been closely following both Antonio's and Aude's work over the last several years and getting to work with these giants of vision will surely be a treat.  In case you don't know what a postdoc is, it is a generic term used to describe post-PhD researchers with generally short term (1-3 year) appointments.  People generally use the term Postdocotral Fellow or Postdoctoral Associate to describe their position in a university. I guess 3 years working on vision as an undergrad and 6 years of working on vision as a grad student just wasn't enough for me...

I've been getting adjusted to my daily commute through scenic Boston, learning about all the cool vision projects in the lab, as well as meeting all the PhD students working with Antonio. Today was the first day of a course which I'm sitting-in on, titled "What is intelligence?".  When I saw a course offered by two computer vision titans (Shimon Ullman and Tomaso Poggio), I couldn't resist.  Here is the information below:

The class was packed -- we had to relocate to a bigger room.  Much of today's lecture was given by Lorenzo Rosasco. Lorenzo is the Team Leader of IIT@MIT. Here is a blurb from IIT@MIT's website describe what this 'center' is all about:

The IIT@MIT lab was founded from an agreement between the Massachusetts Institute of Technology(MIT) and the Istituto Italiano di Tecnologia (IIT). The scientific objective is to develop novel learning and perception technologies – algorithms for learning, especially in the visual perception domain, that are inspired by the neuroscience of sensory systems and are developed within the rapidly growing theory of computational learning. The ultimate goal of this research is to design artificial systems that mimic the remarkable ability of the primate brain to learn from experience and to interpret visual scenes.