Many of the techniques that I employ for object recognition utilize a non-parametric representation of visual concepts. In many such non-parametric models, examples of visual concepts are stored in a database as opposed to "abstracted away" as is commonly done when fitting a parametric appearance model. When designing such non-parametric models, I find it important to visualize the relationships between concepts. The ability to visualize what you're working on creates an intimate link between you and your ideas and can often drive creativity.

One way to visualize a database of exemplar objects, or a "soup of concepts," is as a graph. This generally makes sense when it is meaningful to define an edge between to atoms. While a vector-drawing utility (such as Illustrator) is great for manually putting together graphs for presentations or papers, automated visualization of large graphs is critical for debugging many graph-based algorithms.

A really cool (and secret) figure which I generated using Graphviz somewhat recently can be seen below. I use Matlab to write a simple .dot file and then call something like neato to get the pdf output. Click on the image to see the vectorized pdf automatically produced by Graphviz. 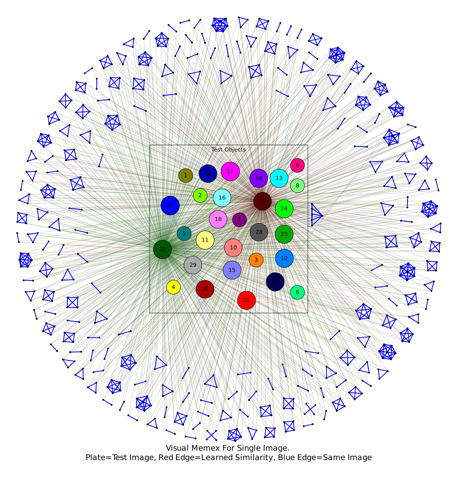 What does this graph show? Its a secret... (details coming soon)
Posted by Tomasz Malisiewicz at Friday, August 07, 2009