There's a lot more to automated object interpretation than merely predicting the correct category label.  If we want machines to be able to one day interact with objects in the physical world, then predicting additional properties of objects such as their attributes, segmentations, and poses is of utmost importance.  This has been one of the key motivations in my own research behind exemplar-based models of object recognition.

The same argument holds for scenes.  If we want to build machines which understand environments around them, then they will have to do much more than predict some sloppy "scene category."  Consider what happens when a machine automatically analyzes a picture and says that it from the "theatre" category.  Well, the picture could be of the stage, the emergency exit, or just about anything else within a theater -- in each of these cases, the "theatre" category would be deemed correct, but would fall short of explaining the content of the image.  Most scene understanding papers either focus getting the scene category right, or strive to obtain a pixel-wise semantic segmentation map.  However, there's more to scene categories than meets the eye.

Well, there is an interesting paper which will be presented this summer at the CVPR2012 Conference in Rhode Island which tries to bring the concept of "pose" into scene understanding.  Pose-estimation has already been well established in the object recognition literature, but this is one of the first serious attempts to bring this new way of thinking into scene understanding. 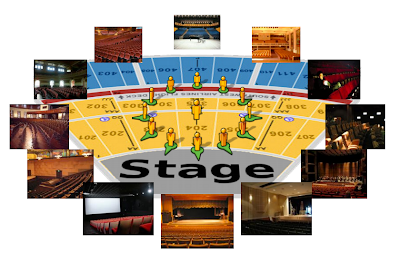 The basic representation unit of places in their paper is that of a panorama.  If you've ever taken a vision course, then you probably stitched some of your own.  Below are some examples of cool looking panoramas from their online gallery.  A panorama roughly covers the space of all images you could take while centered within a place. 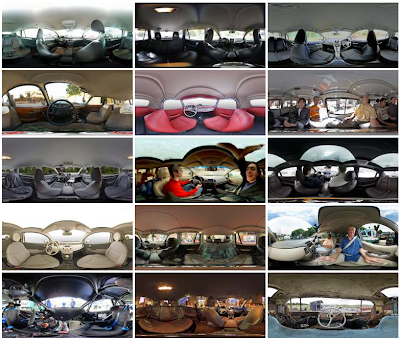 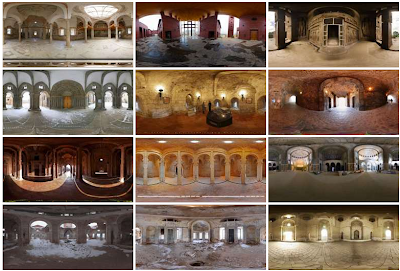 What the proposed algorithm accomplishes is twofold.  First it acts like an ordinary scene categorization system, but in addition to producing a meaningful semantic label, it also predicts the likely view within a place.  This is very much like predicting that there is a car in an image, and then providing an estimate of the car's orientation.  Below are some pictures of inputs (left column), a compass-like visualization which shows the orientation of the picture (with respect to a cylindrical panorama), as well as a depiction of the likely image content to fall outside of the image boundary.  The middle column shows per-place mean panoramas (in the style of TorralbaArt), as well as the input image aligned with the mean panorama. 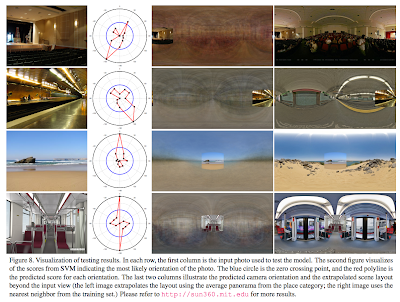 I think panoramas are a very natural representation for places, perhaps not as rich as a full 3D reconstruction of places, but definitely much richer than static photos.  If we want to build better image understanding systems, then we should seriously start looking at using richer sources of information as compared to static images.  There is only so much you can do with static images and MTurk, thus videos, 3D models, panoramas, etc are likely to be big players in the upcoming years.