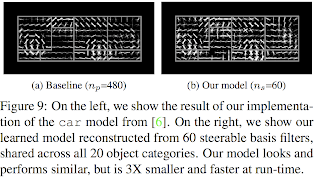 In conclusion, this is one paper worthy of checking out if you are serious about object recognition research.  The simplicity of the approach is a strong point, and if you are a HOG-hacker (like many of us these days) then you will be able to understand the paper without a problem.
Posted by Tomasz Malisiewicz at Wednesday, April 18, 2012