You asked, we listened. VMX will be available to run locally.

The following post is a result of my team launching a Kickstarter campaign two weeks ago and upgrading one of our rewards based on all the feedback we received from backers and potential backers.  We initially intended to launch the VMX project as a service meaning that it would only run over an internet connection to our serves.  But there were scenarios where this was not appropriate. Some people didn't have a fast enough internet connection at home, some people were worried that it would be too expensive to use our product, and some people couldn't use software which required an internet connection at work.  The VMX Project, our flagship computer vision in-the-browser software, will not run using a local object detection server. 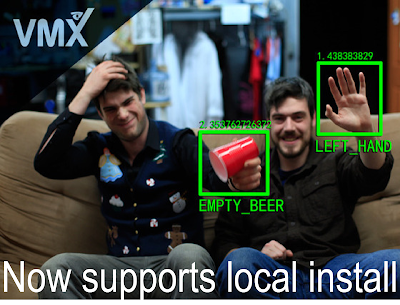 VMX Project: Computer Vision for Everyone

Over the last few weeks, we've listened to many backers (and potential backers) talk about our technology and would like to thank everyone who gave us valuable feedback. Many of you didn’t like VMX being offered only as a service (requiring an internet connection), so we decided to offer a local VMX installation in addition to making VMX available as a service. We didn’t anticipate such great demand for VMX running locally on people’s own computers and networks, but we are dedicated to letting developers have an exceptional computer vision experience and are eager to give our users what they want.

Once the early-access period (March 2014 - June 2014) is over, VMX developers will have the option to receive a single-machine VMX license and install VMX on their own computer. With VMX running on your computer, you won’t have to worry about running out of VMX Compute Hours, accidentally making your data public, and most importantly: it won’t require an internet connection. You will also have the option of communicating between VMX running on your computer and our servers. You will be able to download object detectors, download the models you create during the early-access period, as well as back-up your object models and import them into the VMX as-a-service servers.

During our official launch in Summer 2014, a single-machine VMX license will be available to VMX Developers for $100. Kickstarter backers will be able to simply trade-in 100 of their VMX Compute Hours to obtain one single-machine license and download the software for their own use.

The local VMX software will be installable directly on a computer running Linux. For VMX developers running MS Windows or Apple OS X, we will provide a Linux Virtual Image for download which will contain a pre-installed, and fully configured instance of VMX.

We hope this will make all VMX users more excited about our technology.

--the guys from VISION.AI
Posted by Tomasz Malisiewicz at Monday, January 06, 2014